The BigFoot mobile plastics baler is a great concept! The balers can travel where needed, 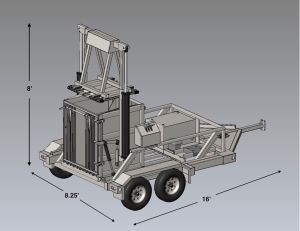 both on road and through agricultural fields, to compact loose film plastic into bales of commercial size and weight, ready to be shipped to recycling markets.
Compacting plastic on-farm saves farmers the time and cost of transporting loose plastic to a distant recycling center. But there are also downsides to decentralized baling – e.g, the expense of buying and maintaining the equipment and of cost of hauling the baler to farms. 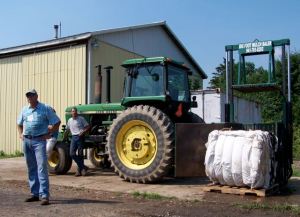 BigFoot Plastic Balers were developed by Dennis Sutton and colleagues in the plastic mulch business. BigFoots are modeled after the down-stroke tobacco balers common in rural areas of Dennis’s home state of North Carolina, modified to add the heft needed to compact plastic film (which has far greater rebound energy than leaves of tobacco). The original BigFoot – which came to be identified as the BF200 – draws its power from tractor hydraulics, whereas the later model BF300 rides on a trailer that is lowered for loading and lifted for travel. The BF300 comes with an integrated Honda engine as its power source, as does the still-later BF400, which was expressly designed to pull greenhouse covers from their frame and compact them. All models produce a compact bale, approximately 40″ cubed, weighing about 1000 lbs.
In 2010 Cornell’s Recycling Agricultural Plastics Project (RAPP) acquired six BF300s for use across New York State. RAPP subsequently developed extensive training materials, some of which should also be applicable to operation of other compactors. RAPP made additional modifications to the balers to address problems encountered during field operations, issues both in the design and fabrication. Some of RAPP’s adaptations are described in the BF300 Guide to operations.
KennCo Manufacturing in Ruskin, FL, has acquired the rights to manufacture a somewhat improved BigFoot baler (www.kenncomfg.org).

BigFoot Plastics Baler: Dennis Sutton, Baler Developer, Describes the BF300 Model. Levitan, Lois and Elizabeth Henry. May 2010. Recycling Agricultural Plastics Project, Cornell University. 5:28 minute m4v video. 149.8 MB. Dennis Sutton, developer of the line of BigFoot mobile plastics balers designed for on-farm collection of agricultural plastics, describes features of the BF300 model and how it works. This particular machine was supposed to be sent to New York State for use by the Recycling Agricultural Plastics Program, but because of seemingly interminable delays in funding, went instead to a rancher in Colorado. The balers that eventually came to NYS in late 2010 differed from this particular baler in small ways and were fabricated elsewhere. This interview was conducted by Lois Levitan at the World Ag Expo in Tulare, California, in February 2010. 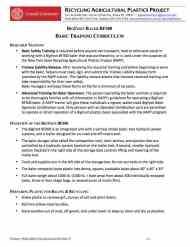 University. 4pp  [pdf 439Kb] Summary of points to cover in the basic training required for anyone who will be assisting in loading, transporting or operating a BigFoot BF300 baler under the auspices of the NYS Recycling Agricultural Plastics Project. Additional training is required for anyone who will be operating the BigFoot BF300 baler controls. All trainees must sign the provided liability release prior to working with the baler.

Checklists for operators of a BigFoot BF300 mobile plastics baler, available in English and in Spanish (en español) – (1) steps to take in preparation for taking the baler on the road, (2) steps for operating the baler and (3) tools and supplies to have on hand. Checklists were developed by Lois Levitan and Nathan Leonard, Recycling Agricultural Plastics Project, Cornell University, and translated to Spanish by Josefina Iannello, Herty Betancourt-Trompa and Lois Levitan. 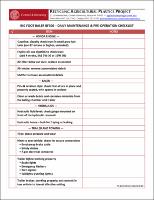 Guides to using the BigFoot, available in written and video formats, in English and Spanish: 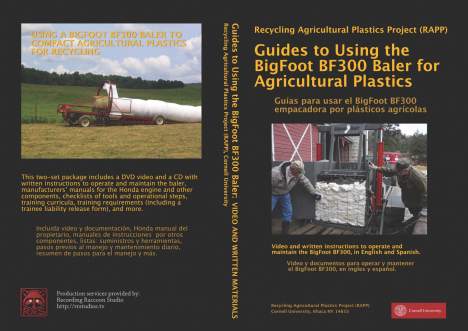 The written Guide explains in words and with more than 50 illustrations how to use a BigFoot BF300 vertical stroke baler to compact waste agricultural plastic into dense, square, stackable bales that fit neatly into the enclosed van of a tractor-trailer for efficient transport to recycling markets. The Guide elaborates on the manufacturer’s manual, shares insights from  RAPP staff following extensive use of the six balers purchased by the Program, and describes modifications RAPP made to the balers to compensate for problems encountered.
Chapters include an introductory Chapter 1 – Why compact plastic?, Chapter 2 about  Training Requirements in NYS, which – having been vetted by legal counsel from NYS Department of Environmental Conservation as well as Cornell University – may be useful to others as well, Chapter 3 – Overview of the BigFoot BF300, Chapter 4 – Preparing to Operate the BigFoot BF300, Chapter 5 – Start the Engine & Lower the Trailer Bed, Chapter 6 – Loading the Baler, Chapter 7 – Making a Bale, Chapter 8 – Finishing a Bale, and Chapter 9 –  Transporting the BigFoot BF300. 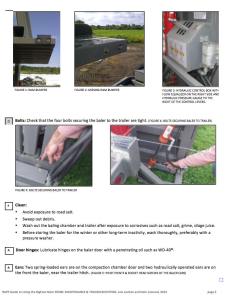 & Troubleshooting was published separately in March 2014. This chapter includes full descriptions and a maintenance schedule for the BigFoot baler compaction chamber, Honda engine, baler and trailer hydraulic systems, paint, trailer, tires and towing. Material in this Guide expands upon the BigFoot BF300 manufacturer’s manual, the Honda Owner’s Manual, and other manufacturers’ manuals, with significant additions, revisions and explanations based upon the extensive experience of RAPP staff, expert opinion of engineers and other consultants, and alterations that RAPP made to the BigFoot BF300 to improve safety and performance.

These videos can be streamed in their entirety or viewed chapter-by-chapter.

NOTE: RAPP’s training materials and guides are for educational purposes only. They elaborate upon the manufacturer’s manual but do not take the place of it. Liability and warranty remain with the manufacturer. 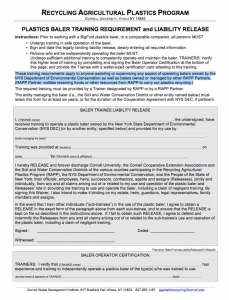 Plastics Baler Training Requirement and Liability Release. version Sept. 24, 2014. Recycling Agricultural Plastics Project. Outlines training requirements for all users of a BigFoot plastics baler (or other plastics compactor) in conjunction with the NYS Recycling Agricultural Plastics Project (RAPP). Includes the Liability Release required of all users. The training and the signing of the liability release are required by Cornell University Counsel and NYS DEC Counsel. [pdf 86Kb]